Ground Fault Circuit Interrupters (GFCI): What Are They?

Electricity can’t differentiate between a light bulb and a human being. If you provide electricity a path to ground through your body, it will pass through it just the same as a light bulb. When electricity finds its way to ground in a manner that it wasn’t supposed to, such as through your body, this is known as a ground fault. Wet areas in the home such as the kitchen and bathroom are prime locations for shocking experiences. A wet hand holding on to a faucet while another part of the body comes into contact with faulty wiring could spell disaster. This is where the GFCI outlet proves its worth. 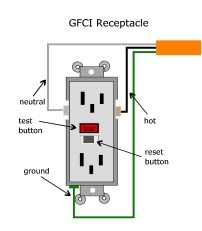 A Ground Fault Circuit Interrupter, GFCI for short, is an electrical safety device designed to prevent fatal electrical shocks due to ground faults. A GFCI device monitors the electricity coming in and compares it to the electricity going back out through the grounded conductor. When the GFCI outlet senses a difference of as low as 5 milliamps (.005 amps), it shuts down or “interrupts” the circuit within milliseconds as a ground fault is most likely occurring. It’s not so fast that you won’t feel a shock at all, but it will prevent a fatal electrocution. 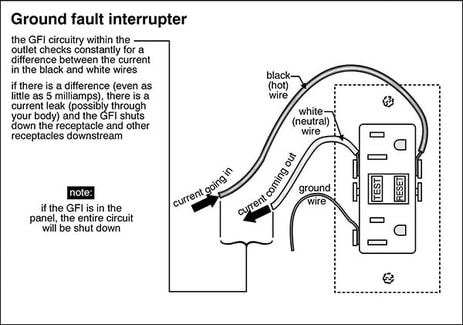 GFCI outlets requirements in the residential setting first appeared in 1971. They were first required to be installed near swimming pool equipment. Fast forward to today, and GFCI outlets are required to be installed in the areas of the home where shocks are most likely to occur, wet areas and areas where ground contact opportunities are best. This includes garages, exterior outlets, bathrooms, kitchen countertops/islands, basements, crawlspaces, and outlets within 6 feet of plumbing fixtures. Click here to see a great chart that illustrates when GFCI outlets became required in each respective area of the home.

That’s a good stopping point. Next week I will talk about different types of GFCI devices, common installation practices, and how you can test the GFCI outlets in your home.