As part of every home inspection, I open up the electric panel to see what’s going on inside. I’m looking for any problems with the wiring or panel itself. One problem I come across quite often is double tapped neutrals. There seems to be confusion surrounding this issue, and I’d like to help clear that up.

What Are Double Tapped Neutrals?

For starters, let’s talk about what a double tapped neutral is. “Double tapped neutral” is a slang term used when 2 neutral wires (the white wires) are terminated under the same screw on the neutral bus bar. This has been an unacceptable practice for many years for a couple of reasons. 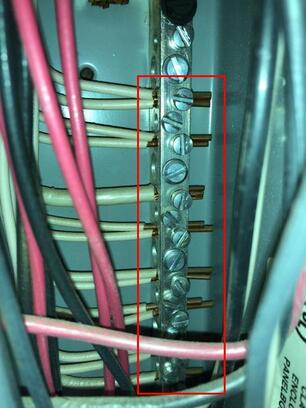 Why are double tapped neutrals bad?

The first reason “double tapped neutrals” at the breaker panel are a bad idea is because it prevents circuits from being able to be isolated when working on them. Schneider Electric provides great formation about this in their Electrical Shortz article: “Can Multiple Neutral Conductors Be Terminated In A Panelboard Termination?”.

The second reason they are a bad idea has to do with the natural expansion and contraction of the copper wire as it heats and cools. When current flows through a wire, it heats and expands. When current flow stops the wire cools and contracts. Double tapped neutrals can expand and contract enough to the point where the connection becomes loose. The loose connection could overheat and cause a fire. Check out these double tapped neutrals I found during an inspection. These connections loosened up over time causing arcing and overheating. Notice the charred wire insulation?

Not A New Problem

For many years, double tapped neutrals were common practice among many electricians. This was most likely due to the fact that early editions of the NEC (National Electrical Code) did not specifically address double tapping neutrals. These electricians must not have known about UL 67.

UL 67 is the safety standard to which electrical panels must be built if they are to be considered “UL listed” panels. For many years, most every reputable electrical panel manufacturer has built panels in accordance with UL 67. UL 67 is very specific when it comes to neutral wire terminations in the electric panel. The standard states, “An individual terminal shall be provided for the connection of each branch-circuit neutral conductor.” Therefore, any panel bearing the “UL 67 Listed” sticker should not have double tapped neutrals.

Have no fear though, if your electric panel has double tapped neutrals, it is an issue that a licensed electrician (or you, if you’re so inclined) can usually take care of in about 10 minutes with nothing more than a screw driver. It’s quite simple. One screw, one wire.