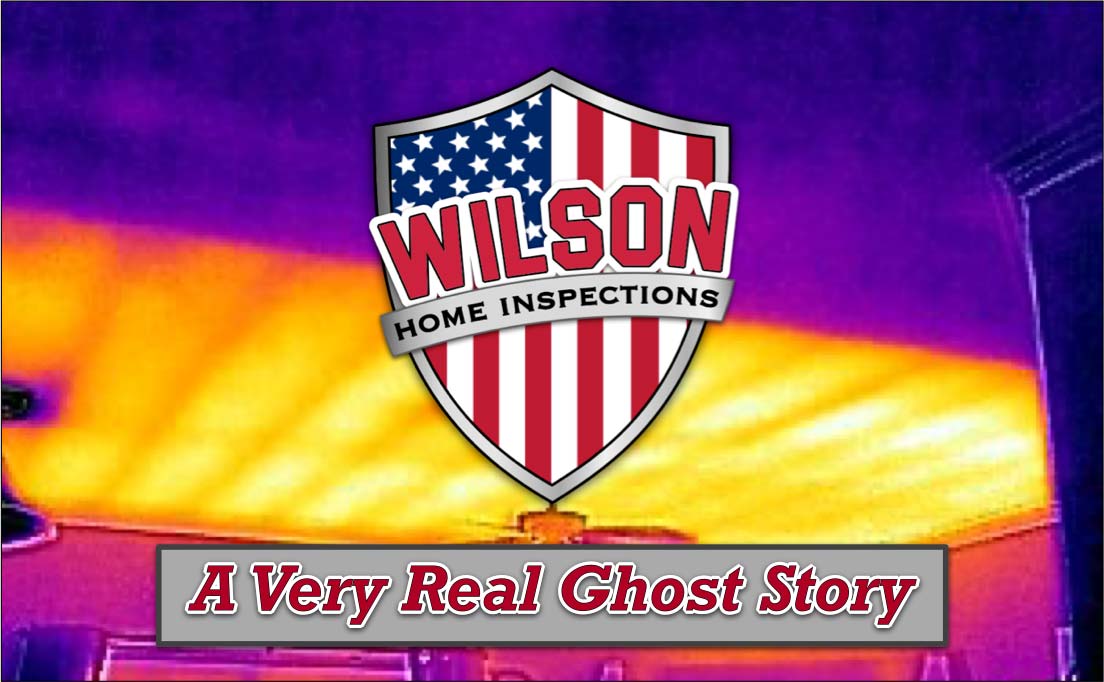 I want to tell you about a ghost that may be in your house. You may have even seen it, but didn’t know what it was. Now I know you’re probably thinking, “Come on now, everybody knows ghosts aren’t real.” (If you aren’t, then that’s a whole different discussion.) However, I’m not talking about the kind of ghost you’re probably thinking about. I’m talking about a phenomenon that can occur in your home referred to as “ghosting.”

You may have noticed some strange dark streaks or shapes appear on the walls or ceilings in your home. Over time they become darker and begin to look like an outline of the home’s framing system. This is what is referred to as “ghosting.” Some other terms for ghosting include “ghost stains”, “thermal bridging”, or “thermal tracking.” Ghosting is a buildup of air-borne particles like dust and soot that occurs slowly over time on walls and ceilings. It doesn’t occur on the whole wall, but rather in specific areas of the wall for a specific reason. Let’s look at the reason.

It generally takes 3 things for ghosting to occur: air movement, soot/dust particles, and condensation. The air movement is provided by your HVAC system or natural wind currents when doors and windows are opened. Soot and dust particles can come from a variety of sources such as:

The last piece of the puzzle is condensation. Where does the condensation come from you ask? If you didn’t already know, condensation is created when warm moist air comes into contact with a cold surface. Think about a cold glass of water on a hot summer day. The water that forms on the outside of the glass is condensation. Your home is no different. The key to ghosting is understanding why some areas of the walls and ceilings in your home are colder than others, to the point of condensation occurring. The most common cause is usually related to some form of insulation deficiency. Let’s look at some real world examples I’ve seen to help illustrate the issue.

Take a look at this photo. See the darker area on the ceiling? That is ghosting.

Now take a look at the image below. This image was taken with the infrared camera in the same area. 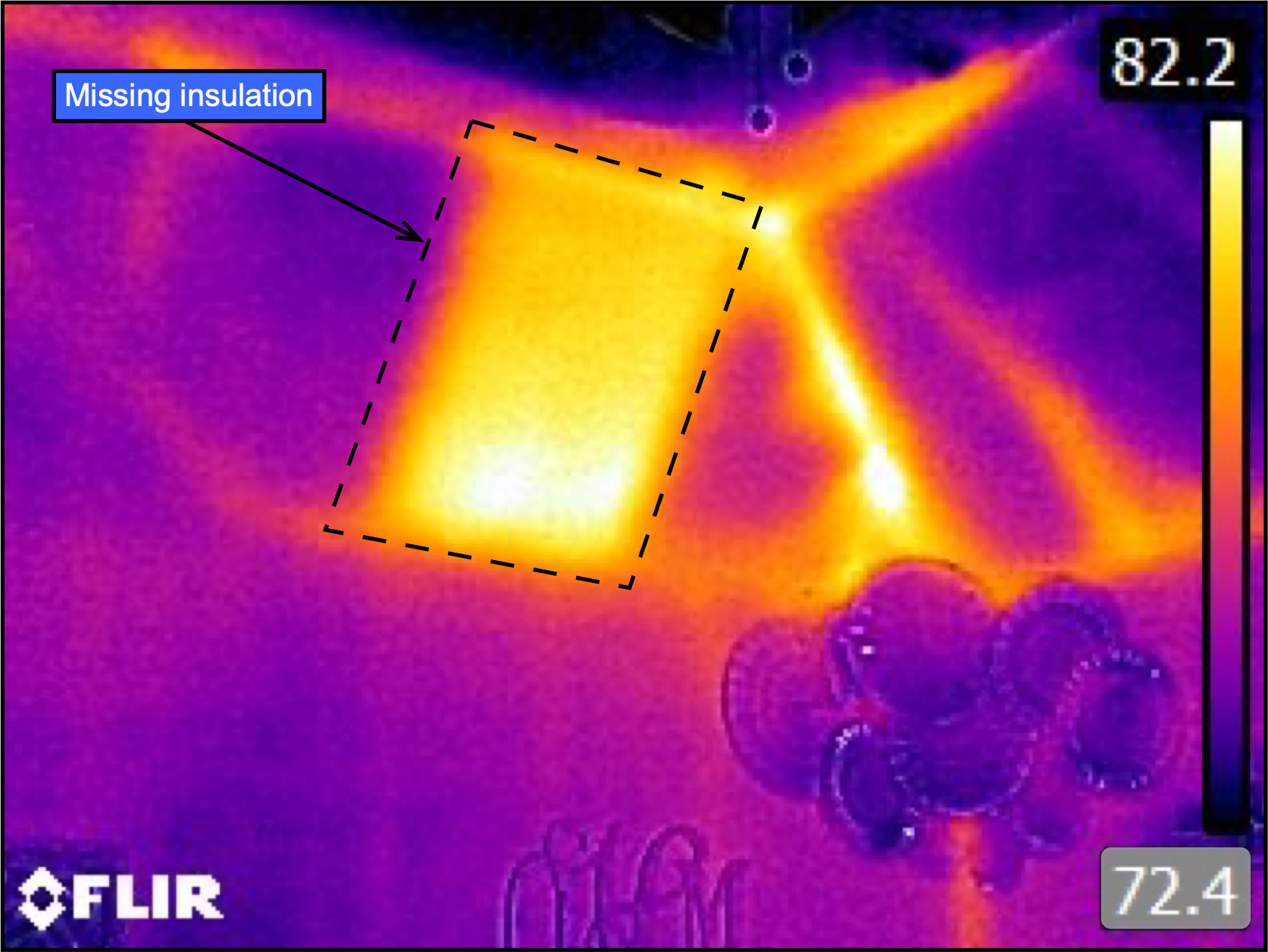 This image was taken during the early summer when ambient temperatures, and consequently the attic temperature, are warmer than the inside. As such, any areas with missing insulation would show up warmer than the surrounding areas. We see just that in this image. Now when we compare the 2 side by side, you can see the ghosting is a match to the area of missing insulation.

Now imagine it’s wintertime and the temperatures are reversed. The insulated portions of the ceiling would then be warmer than the uninsulated portion due to colder attic temperatures. This is where the condensation comes in. The warm air in your home, combined with moisture from sources such as showers, gas appliances, and even your breath, passes over this colder area of the ceiling and the moisture condenses on the surface. Now this is most likely not going to be an amount of condensation large enough to see with the naked eye, but it is enough to attract the dust and soot particles we discussed earlier. Repeat this process enough (think years) and the buildup becomes dark enough to see. Let’s look at another example. we’ll look at the infrared image first this time. 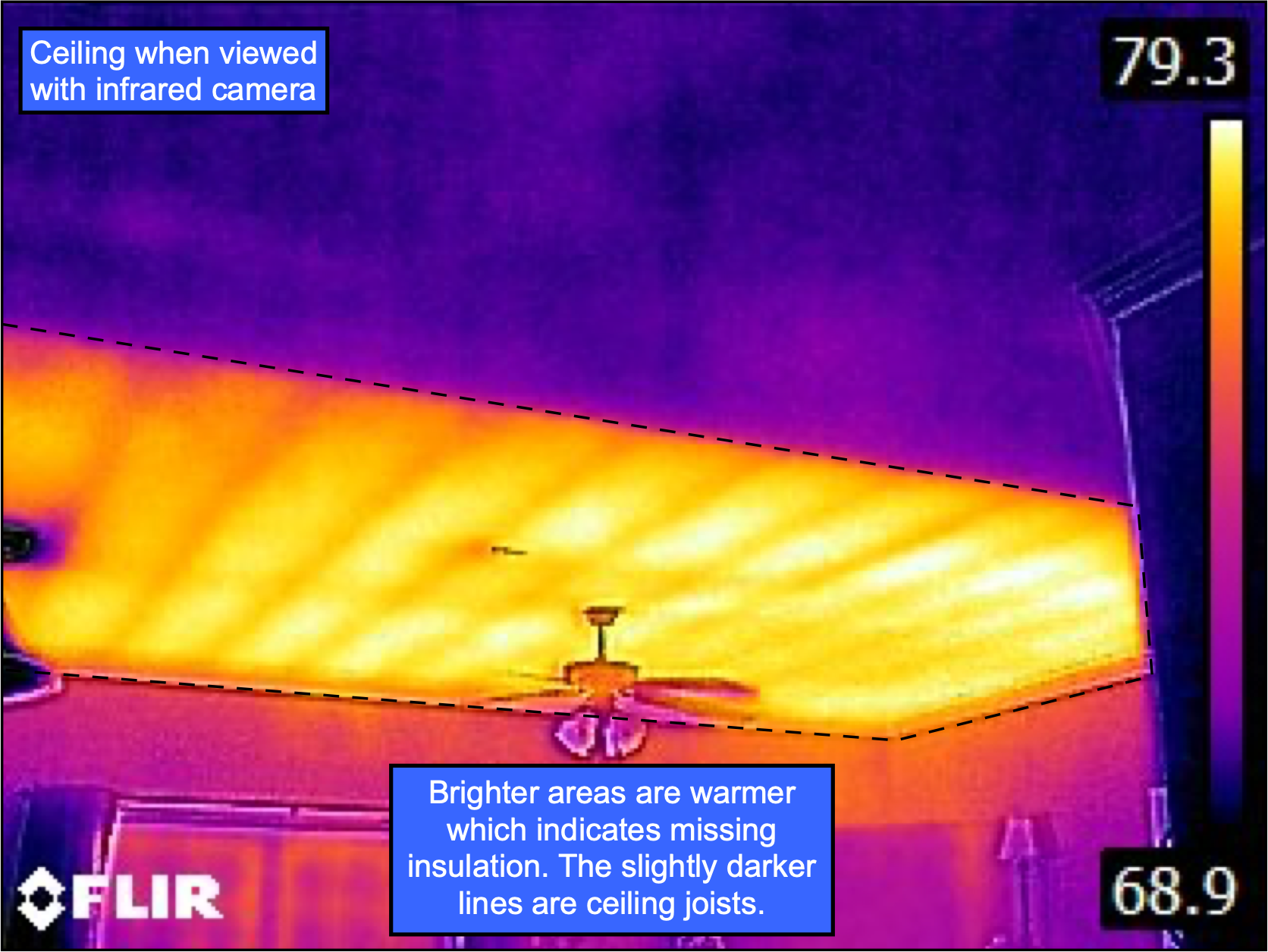 Just like the last example, this was taken during the summer. Notice the much warmer portion of the ceiling? See the darker lines indicating the location of the slightly cooler ceiling joists? Check out the clean line across the ceiling where the insulation stops. Now look at the regular image. 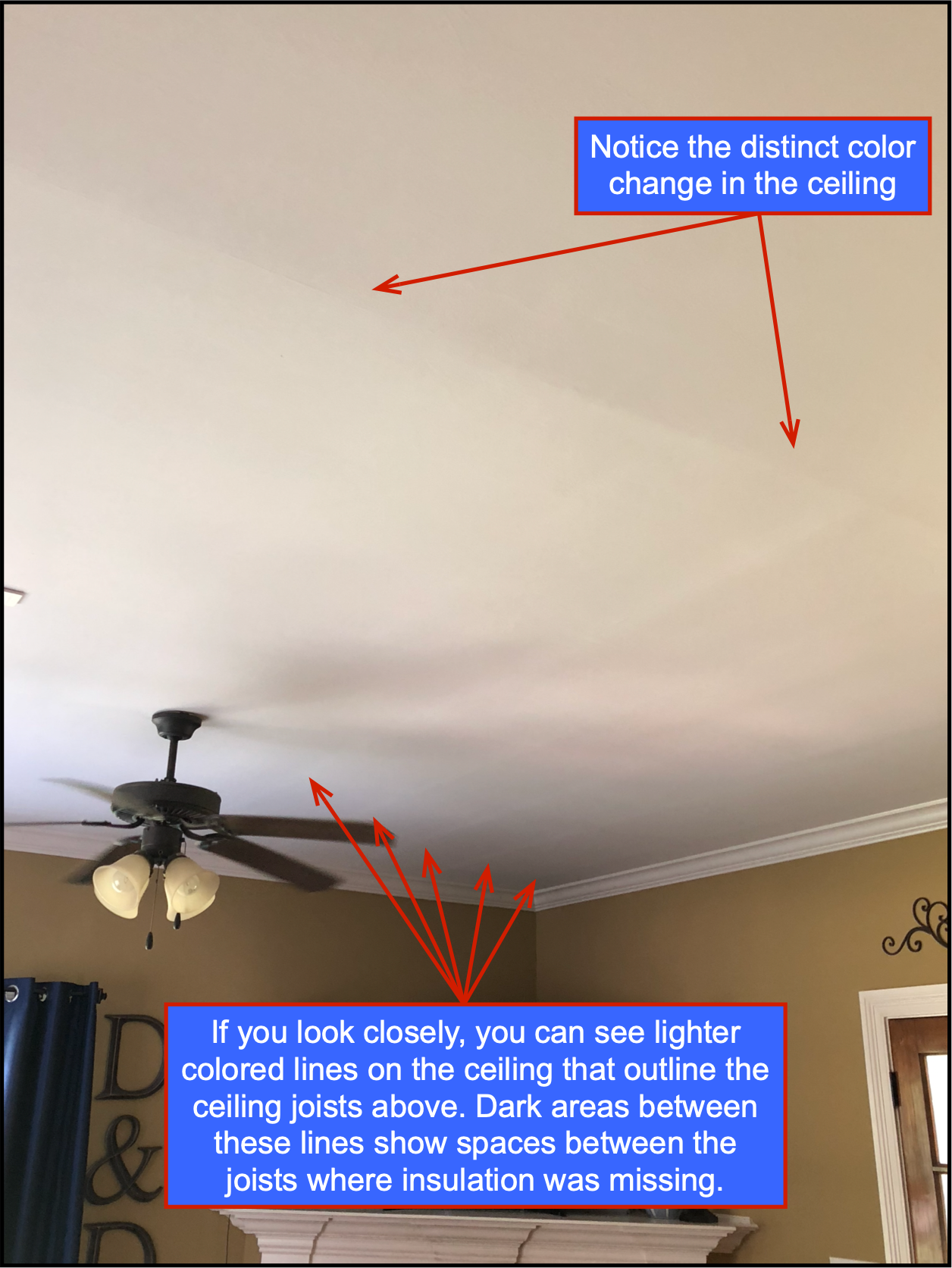 This house was was 10 years newer than the previous example. The ghosting isn’t as pronounced as the last image since there hasn’t been as much time for the particle buildup to occur. If you look closely you can see some lighter lines where the ceiling joists are located. The darker areas in between ,once again, are where the condensation occurred due to missing insulation.

Who ya gonna call?

To get rid of the ghosting, your first instinct may be to paint over it. While this will address the cosmetic issue of ghosting, it will only be a temporary fix as the ghosting will return with time. The real fix would be to add insulation to eliminate the root cause: condensation due to cold spots. Once you have added adequate insulation, you should clean the area thoroughly then apply a coat of stain hiding primer. Finish it off with a fresh coat of paint on the whole ceiling.